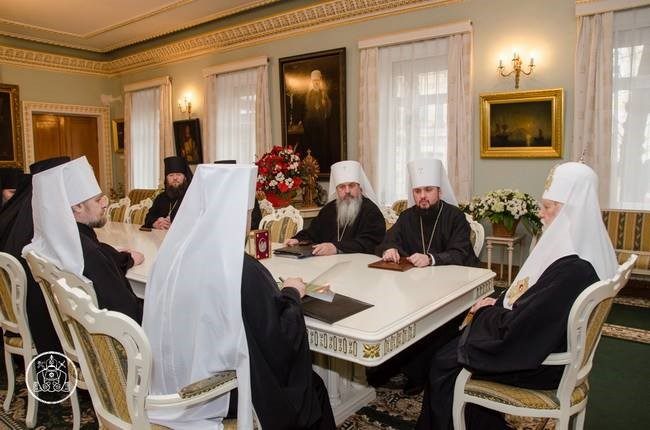 The clergy was most indignant at SOGI being included to the legislation (let’s recall that ban on discrimination on the grounds of sexual orientation and gender identity  was included to the Labour Code on November 12) and also at “attempts to take the definition of marriage as alliance of man and woman out of the Constitution.”

We can point out that such talks appear in public, still there is no strict definition of marriage as alliance of man and woman only in the Constitution of Ukraine. But there is article 51 that begins with the following words: “The marriage is based on the voluntary consent of man and woman.” The Family Code contains direct discrimination on the ground of sexual orientation as its article 21 defines marriage as the matrimony of man and woman.

The draft of changes to the Constitution by Constitutional Commission that offered to take wording about man and women out of the fundamental law and to add the clause of non-discrimination on the grounds of SOGI was also discussed on the synod. UOC KP protested against such changes and underlined that All-Ukrainian Council of Churches and Religious Organizations also adhered to this position.

As the result, the participants of the synod, worried about “morals and Christian values”, decided to approve the attitude of Patriarch Filaret towards the Labour Code (Gay Alliance Ukraine already wrote about his offer (ru) to change non-discrimination wording in Labour Code for “ban discrimination on the grounds of attitude to sexual relationship”).  At the same time the clergy called sexual orientation and gender identity “legally undefined notions based on ideology”. Probably it seems to them that “attitude to sexual relationship” is much more definite.  UOC KP also promised not to let such “undefined” notions in the Constitution.

Those defenders of spirituality reminded MPs of “God condemning Sodom and Gomorrah for destruction and also of Paul the Apostle anathematizing Corinthian incestor, the man that married his stepmother.” Synod’s decision doesn’t make it clear what marrying your stepmother has to do with sexual orientation and gender identity.

Common parishioners were also threatened with excommunication: “Each Orthodox Christian that overtly approves and supports “legalization” of sodomy falls under the curse of Sodom and Paul the Apostle anathema and is banned from the Church till [he\she] repents.”

Synod’s decision also underlines that church is totally against legislative recognition of same-sex marriage or registration of same-sex partnership and also against acceptance of “same sex sexuality” propaganda (nobody explained the parishioners what exactly it is. – author’s note), which includes “having so-called “pride parades” and other similar novelties.”

After all these statements UOC KP adds that it doesn’t support the discrimination of homosexuals. And hurries to justify such tolerant wording: “But we are totally against interpreting homosexual way of life and behavior as natural, normal and useful ways for the society and each personality. We are against propaganda of sodomy as a variant of sexual life norm and the state encouraging its citizens to have same-sex sexual relationships.”

Let’s recall that Ukrainian churches spoke against the clause on ban of discrimination on the grounds of SOGI that was implemented in the Labour Code. And Patriarch Filaret came up with “sexual relationship” wording before the law was adopted.