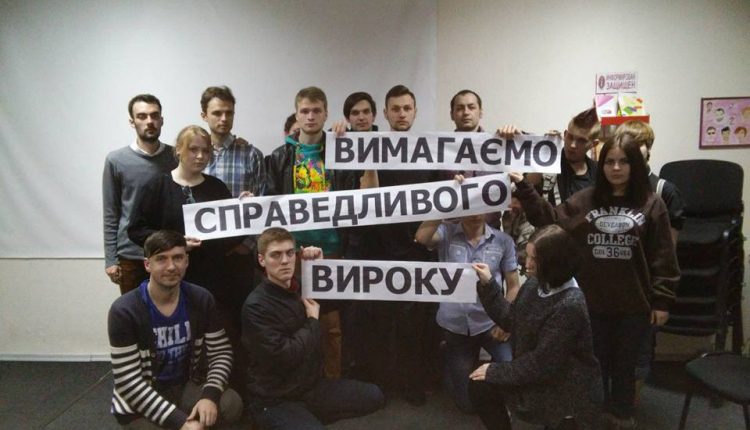 Legend on all photos: We/I demand a just sentence

On March 25 the hearing of the case of the Equality March assault had to take place in Obolon District Court on a full scale: with prejudicial inquiry materials examination, questionings of victims, witnesses and accused. However it was postponed once again. GAU still tries to find out was is the reason for it and what is the new date of the session. On Friday we couldn’t reach judge Bevzenko who reads this case. GAU source in law enforcement bodies also couldn’t give any details, telling only that the session being postponed.

Currently it is obvious that the process is deliberately dragged out as the sessions on the Equality March assault are postponed more often than they take place. The court can’t get to the hearings since last December even though this is the only case regarding the Equality March assault that got to the court, it is about the attack on law enforcers and doesn’t consider the motive of homophobia.

Read also: The trial on the Equality March assault was postponed at request of the accused

It caused the We Demand a Just Sentence flashmob in the social networks. The activists’ marches by the court had the same motto before demanding to punish those guilty in the Equality March assault justly.

“We need to be systematic and consistent in this situation and not to give the law enforcers any reason to think that we forgive and forget such crimes. Otherwise such situation will be repeated, such cases will be quietly delayed and they will nod with compassion but nothing will change,” is said on the Facebook page.

The flashmob organizers offer all those who care to make photo with a demand for a just sentence and put it online with a corresponding hashtag and links to the officials who can change the current situation. The flashmob is due till the accused get their punishment.

Let’s recall that the accused are members of the Right Sector 26-year-old Oleksii Protokovylo, 41-year-old Danylo Dashevskyi, 21-year-old Kyrylo Viliamovskyi and 38-year-old Vitalii Kyrylchuk. They are charged with hooliganism of a group of people with resistance to the authorities in duty status (part 3 of Article 296 of the Criminal Code of Ukraine). According to the charge, they can be imprisoned for 2-5 years.

Last June homophobic radicals attacked the Equality March procession. The nationalists pulverized tear-gas to the crowd and threw explosive sticks pumped with metal objects. Later the tough guys went “safari” for the participants of the March coming home. The radicals’ actions resulted in 9 activists and 11 law enforcers injured, one of them was hurt severely.