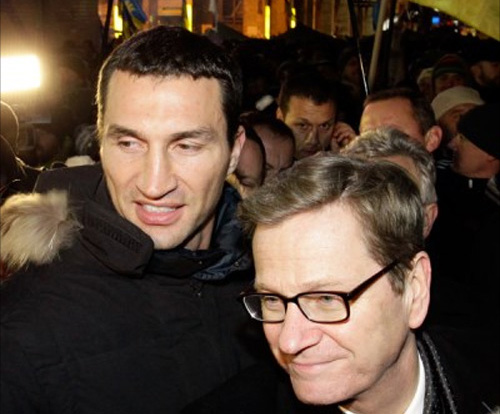 Guido Westerwelle in Kyiv, or “gay-firewood to the Maidan bonfire”

German Foreign Ministry Guido Westerwelle visited protesters on Maidan Nezalezhnosti Square. In particular, he walked down the Maidan and greeted people. In their turn, Maidan protesters greeted Mr. Westerwelle with a loud chanting, informs "Telegraf". In all likelihood, not everyone, but many of the greeting protesters are aware that Mr. Westerwelle is openly gay and they are not troubled by the fact.

According to the Batkivshchyna Party press service, Mr. Westerwelle held a meeting with the chairman of the Batkivshchyna faction Arseniy Yatsenyuk and chairman of the parliamentary faction UDAR Vitali Klitschko. In his interview with reporters after the meeting Mr. Yatsenyuk noted that currently a lot of attention is focused on Ukraine: "The fact that nowadays foreign ministers from around the world are in Ukraine, – is an indication that the world does not simply watch, but as well supports the struggle of Ukrainians for their rights". The absence at the meeting of another representative of the opposition, the leader of the right-wing Svoboda (Freedom) Party Oleg Tyagnybok, can be considered as indicative: at his own time Mr. Westerwelle had invited to negotiate on European integration Mr. Klitschko and Mr. Yatsenyuk, while Mr. Tyagnybok had been left uninvited. "The Minister is a famous person who professes, shall we say, believes of non-traditional sexual orientation ", – reasoned Tyagnybok afterwards in reply to the question why he was bypassed.

According to Mr. Westerwelle, at the meeting with the opposition leaders a "constructive conversation about the political situation in Ukraine" took place: "We came here with the clear message, and it is most understandable and explicit – we came as Europeans to Europeans, and we do care about the destiny of Ukraine".

"We are promoting European values and declare that the doors to EU membership remain open. Ukraine should be on board of Europe, because we have a lot in common – a common history, culture, values. EU proposals, as well as the German proposals, remain the same – we would like to be your partners in the future", – noted the head of German Foreign Ministry.

In his turn, the leader of UDAR faction said: "What is happening today in Ukraine has a large response in the world and in Germany in particular. We testified our aspiration and our efforts to establish European values in Ukraine. And all of our efforts to resolve political crisis in Ukraine peacefully and legitimately. We were glad to hear that the doors to EU membership remain open to Ukraine".

And finally – a quote from an article of the Russian "Komsomolskaya Pravda" on the same topic, which is called "Gay-firewood to the Maidan bonfire": "Ukraine is called to Europe by nationalists, anti-Semites, neo-Nazis and homosexuals. Maidan in Kyiv rejoices – not so often Ukraine sees so many former and current important foreign politicians as one blow  (original author's orthography preserved, apparently it was meant "at one blow" – remark by GAU). That is on Wednesday night to support protesters came the German Minister of Foreign Affairs – Guido Westerwelle. It was reported that he talked to the leaders of Ukrainian opposition Arseniy Yatsenyuk and Vitali Klitschko before making his speech on the demonstration, however holding back the fact that Guido arrived in Kyiv not alone, but together with his husband (or wife, who knows how to tell!) Michael Mronz. And this fact is not surprising at all. As German Foreign Minister is an open homosexual who no less than openly lives with a man".