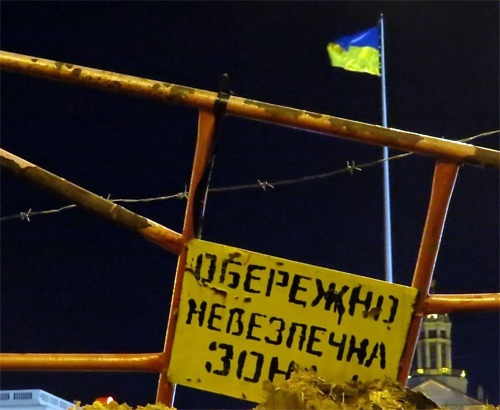 There is new information at our disposal about yet another provocation against EuroMaidan using LGBT issues. Fake "Demonstration in defense of LGBT people", according to organizers of the provocation, should discredit EuroMaidan among ordinary Ukrainians. Unfortunately, the high level of homophobia in the Ukrainian society once again pushes dishonest political technologists to the idea of primitive manipulation, already named "black and blue PR".

Representatives of LGBT community (Lesbians, Gays, Bisexuals and Transgenders) inform us that they are getting invitations to participate in the demonstration "in defense of the rights of sexual minorities", which is supposedly scheduled for January 9. Such offers come from people who are professionally involved in the selection of performers and animators. They offer an equivalent of 100-150 US dollars to participate in such demonstrations.

It is obvious that such an increase of remuneration became a consequence of the failure of recent attempts to discredit one of the political parties – a participant of EuroMarch. Then, under the guise of gay people they tried to use homeless squad, who were hired, according to news reports, for a bottle of vodka and 50 hryvnias.

We hereby declare that we have never offered or would offer money for participants of the actions in defense of the rights of LGBT people. Participation in such actions have always been and would be completely voluntary.

We hereby inform that we have not planned and not going to plan any LGBT-related actions at EuroMaidan precisely because we fully understand by whom and for what purpose they would be used. Previously we published the statement on our participation in EuroMaidan.

We hereby underline that a number of manipulations related to LGBT issues, in our opinion, could be a part of a "multi steps plan", with the ultimate goal to introduce legislation against the so-called "homosexual propaganda" in Ukraine, as already happened in neighboring Russia. Let us recall that such legislation became only a part of the pressure system on the Russian civil society and the restriction of freedom of speech, expression and peaceful assembly in Russia. This system also includes so-called laws "about foreign agents", "on the punishment for insulting the feelings of believers", "on libel", as well as laws that regulates the activities of NGOs and on peaceful assembly. Similar legislation is methodically being promoted in Ukraine by agents of influence of so-called "Russian world" using the same rhetoric.

The Head of the EU Mission: Mykola Azarov statement on same-sex marriages has nothing to do with the reality

Gays as a nation?