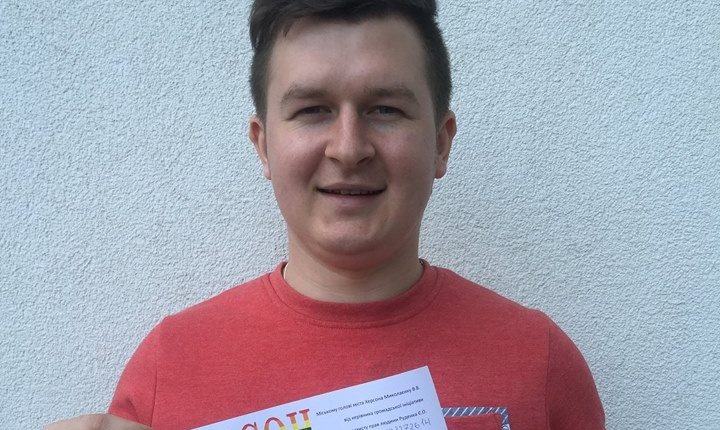 Has a semi-finalist of the reality show Ukraine’s Got Talent decided to organize a pride in Kherson?

23-year old citizen of Kherson Eevgen Rudenko announced on his Facebook page that he would hold a march for the protection of the LGBT rights in Kherson.

Rudenko posted a photo with his application to hold the event and his appeal to the city authorities. “I decided it was time to do something useful. I got an idea to hold a wonderful event to show our European city, the city with human values, to the whole country. The International Day against Homophobia is observed on May 17. Therefore, I invite people to participate in the peaceful march. I believe many Kherson citizens would like to join and express their own support to those, whose rights are being infringed upon”, states Rudenko. 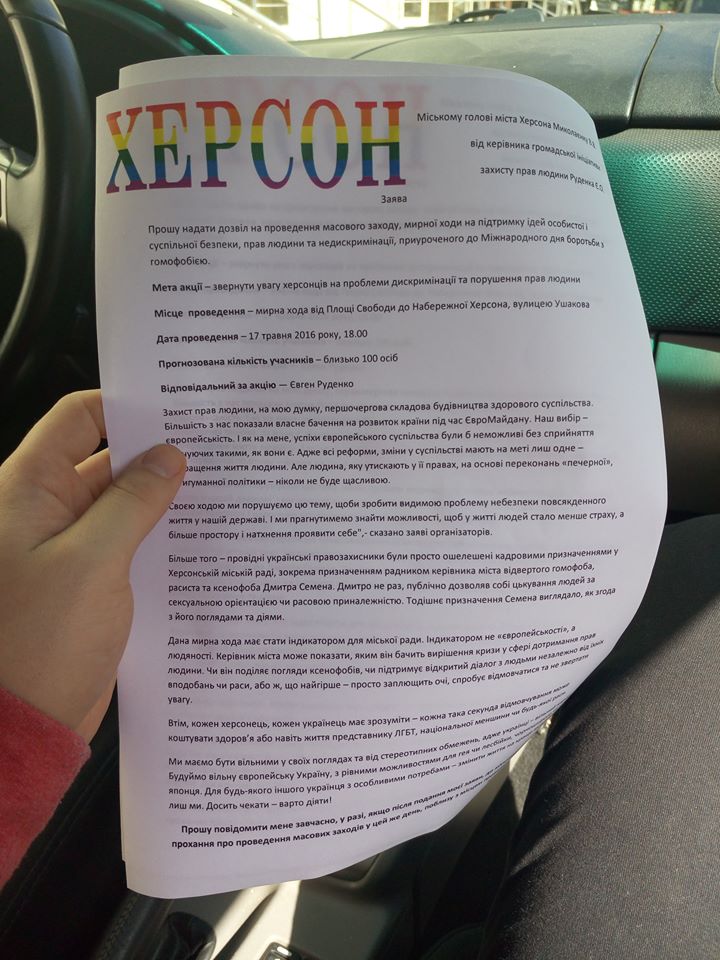 According to his application, the participants would march from the Freedom Square to the seafront. The young man expects one hundred citizens to join the march. “I believe protection of the human rights is a major component in the building of a sound society. During Euromaidan, most of us showed their own vision concerning the development of the country. We choose Europeanness. I think the achievements of the European society would have been impossible if not to accept the people as they are. Since all the reforms, changes in the society are intended to improve the human life, said the document. – “This peaceful march should become an indicator for the City Council. The indicator of the humanity, not Europeanness.”

How seriously can Rudenko’s initiative be taken? He is inclined to do eccentric things and to the ventures. In 2013, he took a shot at freestyle rap at the reality show Ukraine’s Got Talent and made it to the semi-final. Last year he “ran for” the city mayor of Kherson. Rudenko edited a series of video films with Hollywood stars allegedly campaigning for him. In another election video, the candidate promises to resolve the problem of homeless animals saying that earlier “the dogs among the authorities didn’t want to resolve the problems of the dogs in the streets”.

Rudenko didn’t have to wait for the response too long. The deputy commission for culture, spirituality, youth and sports has already spoken against the march. The deputies intend to recommend the Mayor Volodymyr Mykolaienko against the peaceful march in order to “avoid confrontations and bloodshed”, reports Kherson Visti.

It should be also noted that the subject of LGBT has been used for some questionable purposes recently. For instance, at the end of March “the group of the concerned citizens of Bukovyna” addressed the authorities through the website for online petitions of Chernivtsi City Council to hold a peaceful march for the protection of the LGBT community on May 5, Europe Day. On April 18, Life in Mykolaiv Facebook group posted a “news“ that on May 15 there would be an LGBT carnival in the city — a parade and concert in the square. The authors informed that during the march “there would be 3 employees of the Civil Registry Office specially trained for LGBT and able to register the couples while moving“.