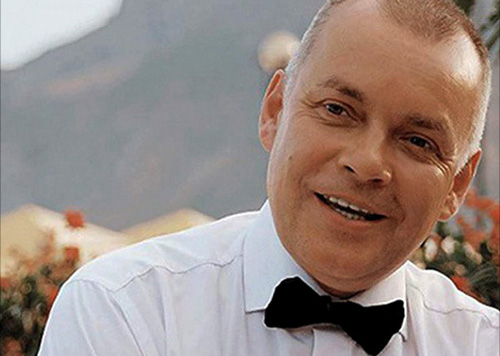 Pictures of a famous Russian journalist Dmitry Kiselyov, who is being the mouthpiece of the Kremlin's anti-Western propaganda, carelessly walking about in Amsterdam with his family, blasted the Internet.

Passing by compatriot accidentally captured on her camera the "burner of gays' hearts" during his vocation – and not anywhere but in the LGBT capital of Europe! "Guess who we met in the city center of Amsterdam? Dmitry Kiselyov. Apparently he is drawing ideas for his next TV show about the Rotten West!" – wrote a girl in her twitter. Users of social networks immediately caught up the message and started to discuss what an inappropriate city chose the famous TV presenter-homophobe for the family vacation. "Wonderful. In between his stories about rotten GayNazi – Europe  Dmitry Kiselyov and his family went boating in Amsterdam. Or even afraid to speak – "on gondola" (TN: Russian wordplay of "queer" and "condom")", – wrote in his twitter worker of the Fund for the fight against corruption George Alburi.

"How could he! That land is literally saturated with lust and sin! Perhaps he has really thick sole shoes. Ana a cross on his chest!", – made an assumption lj user Dim Koks.

"I wonder why is Sochi is not good enough for him? I would like to know whom everything was built for?" – wondered unknown commenter. In reality hardly anyone can be truly surprised by the fact, that the mettlesome crier of Russian imperial state and a spiritual pillar preferred the trip into the very bosom of the enemy – "Gayrope" – "the nest of lust and sin" over traditional fishing of omul on the Baikal Lake or the Kuban Cossack amusements. Joking aside, this is just another evidence that Russian citizens are being fed with ideological mixed fodder of anti-Westernism and patriotism while the authorities and their accomplices themselves do not wish to taste.