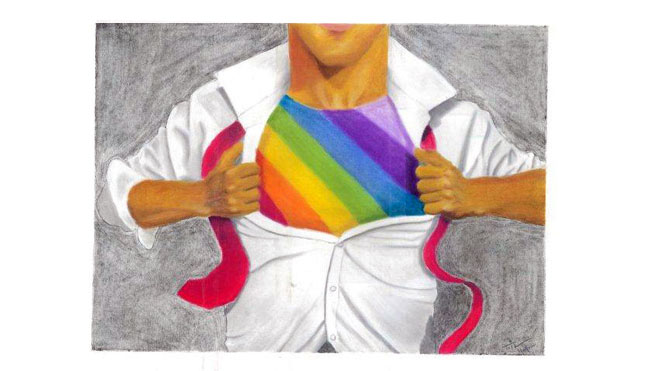 Let’s recall that similar festival that was planned to be held in the end of March in Lviv was sabotaged by the right radicals, and street LGBT quest in frames of the event was banned by court in the instigation of city authorities.

The representatives of Ukrainian Misanthropic Division neo-Nazi group charged themselves with the Equality Festival sabotage and published corresponding statement on its official public page VKontakte.

“Smashed cars of cops, LGBTish journalists and cops themselves, quite many of them. Some our guys also were injured. Subhumans were taken out of the city surrounded by lots of special ops. Glory to the Victory!” the radicals bragged.

Anonymous call about bombs in the hotel where the Equality Festival participants stayed was made to Lviv police and as the result all hotel guests were evacuated. The building was surrounded by the aggressive guys in ski masks, throwing stones and firecrackers at the law enforcers’ buses.

Mass-media definitely knew about it because the events in Lviv were covered in the media in details.

Read also: MPs demand to investigate the events in Lviv without delay

Despite this some representatives of Ukrainian press had inappropriate response to the message of the Equality Festival taking place in Kyiv. So the event was called “sex parade” on RIA Novosti Ukraine website and Correspondent website once again used “gay parade” wording that has nothing in common with reality.

Gay Alliance Ukraine believes that it is not only professional incompetence but also an attempt to use newsworthy event for creating the “hot news”. At the same time Ukrainian mass-media are silent about Obolon court pronouncing the sentence to the radicals who had attacked the Equality March in Kyiv in 2015 resulting in injuring several March participants and law enforcers.

Read also: “The provocation victims with high level legal awareness”: details of the trial on the Equality March (ru)

The following is the manifest of Gay Alliance Ukraine on account of misinterpretation of information about the Equality Festival in Ukrainian press.

Ukrainian public organization «Gay Alliance Ukraine» expresses its indignation on account of negative coverage of LGBT news in some mass-media.

Today, on April 8, the start of preparation for the Equality Festival in Kyiv was announced on the official Facebook page of the Festival, the discrimination-free cultural platform.

Some Ukrainian media distorted this information and presented in with explicitly incendiary headlines.

We are outraged with such manipulation of facts about LGBT community and its activities in the media. We are concerned about Ukrainian journalists more than once using such presentation of information that causes negative response of the society.

In in particular, it’s utterly unacceptable to use “sex-parade” wording in regard to the event aimed at turning public attention to the discrimination of different minorities.

It’s worth mentioning that using this newsbreak as a “hot news” Ukrainian mass-media ignore other newsbreaks, equally important, for example the fact that today Obolon district court announced its verdict in case of right radicals supporters attacking the Equality March in 2015.

We call the media for correct and accurate presentation of information.

The Equality March proceedings: 2 years of suspended sentence because of “sincere repentance”