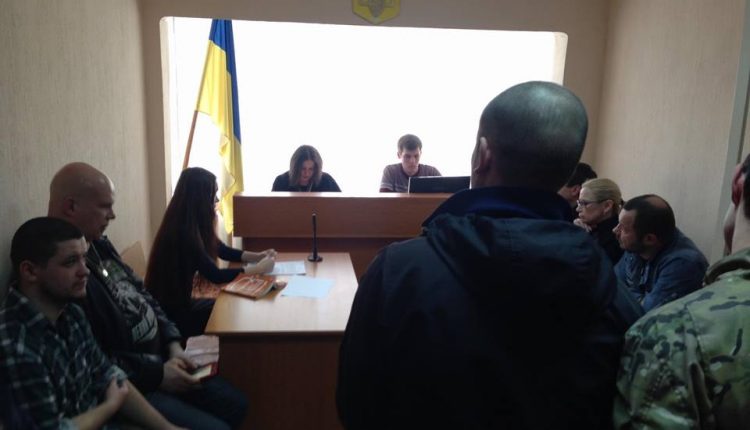 On April 8, the Obolon district court rendered judgement in the case of the attack on the Equality March held in Kyiv last June. As we have already informed, the court treated the radicals highly humanely, and all four defendants got a two-year suspended sentence. The court has taken into account the confession of guilt and their “sincere remorse” as a mitigating factor. You can read how “sincere” their remorse was in our detailed story covering the court hearing.

The members of the Right Sector 26-year-old Oleksii Protokovylo, 41-year-old Danylo Dashevskyi, 21-year-old Kyrylo Viliamovskyi and 38-year-old Vitalii Kyrylchuk refused to confess guilt at the previous hearings. Now the strategy of the accused party has changed completely. All four have entered into plea negotiations and agreed to plead guilty. The plea bargains dated March 25. The documents are similar stating that the defendants pleaded guilty and sincerely repented their acts. The radicals, therefore, asked the court to reduce the charge, mentioned in paragraph 3 of the article 296 of the Criminal Code of Ukraine (imprisonment for a term of two to five years) to a suspended sentence.

When the judge read out all four documents, the defendants orally confirmed that they fully agreed with the indictment and repented their acts.

We recall it was stated in the indictment that offences committed by the defendants were very impudent. The radicals lit and threw firecrackers at the police officers, who guarded the Equality March. As mentioned in the documents, the acts of the defendants were dangerous for health and lives of the police officers, the Equality March participants, and other citizens. The homophobes were indicted for hooliganism committed by a group of persons with resistance to the representatives of authority while on-duty.

During the hearing, two defendants decided to speak in own defence. It was very clear that the radicals had no doubt to the truth of what they said and their regret was purely formal in nature. 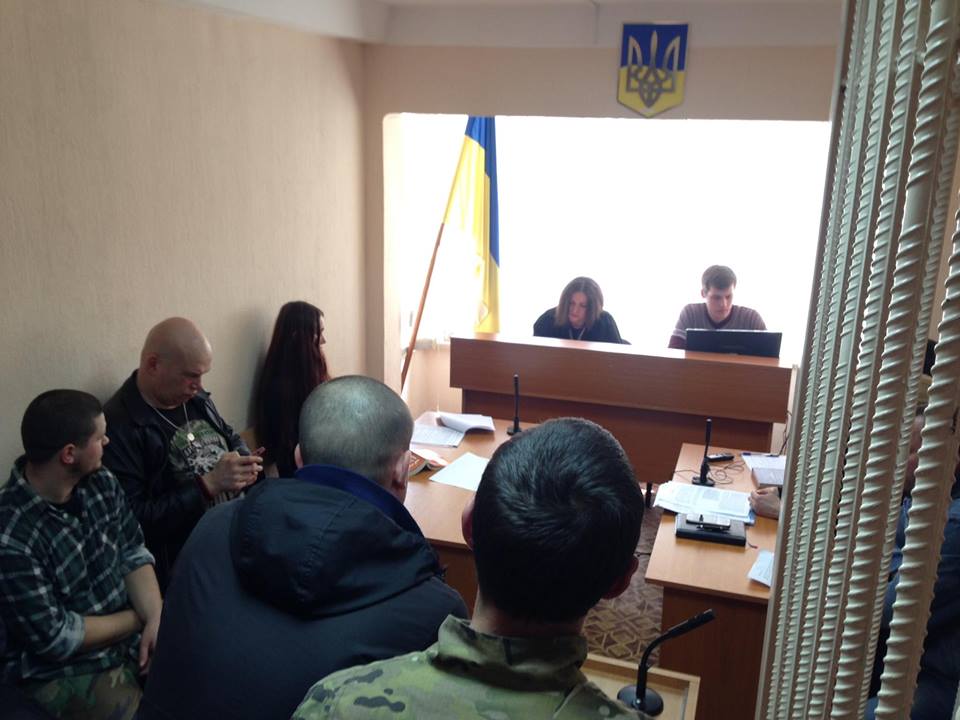 “The society is losing the last values”. Danylo Dashevskyi stated, “I admit guilt for the criminal violation incriminated; I sincerely repent and realize that the police officers could be injured due to the actions of those, who did throw firecrackers at the police officers. My actions and the actions of those, who came with me, were not aimed at inflicting bodily injury on the police officers. We tried to disrupt the spreading and propaganda of the activities conducted by the sexual minorities, who didn’t try to protect their rights, but disseminated and propagated the perversions, which I as a father of two children consider to be detrimental to our society and to be disregard of the accepted moral standards and disruption of public order.”

The member of the Right Sector insisted that homosexuality is a disease, and indulgence of “propaganda of the perversions” was unacceptable, especially now, when there are hostilities in the East of the country. “I can’t bear to see the society losing the last values, the authorities letting it happen, guarding the persons, who propagate perversions. It is not our intention to persecute and discriminate the sexual minorities. I personally believe they are sick people. However, at the time when there is the war in the East of the country, I am confident such propaganda actions as the Equality March or the festival of the sexual minorities are unacceptable. I can’t look in the eye of the families of the friends and brothers, who have fallen defending the independence of our country and who supported the traditional family. It is nonsense when normal men die, but the LGBT community arranges a parade at that time”, continued the defendant.

Read also: The Equality March case in the court: about “hysterics of the LGBT”, gays in the ATO and a penalty for the violence (VIDEO, PHOTO)

According to him, conducting a public debate about the rights of the LGBT can take place after the military conflict with Russia is settled. “The question arises: What is the focus of this gay parade? I think there can be only a victory parade. When we gain the victory, then we can talk about the rights of the minorities through open public dialogue by taking into consideration the opinion of the conservative part of the population, the LGBT community, and other persons”, concluded Dashevskyi. 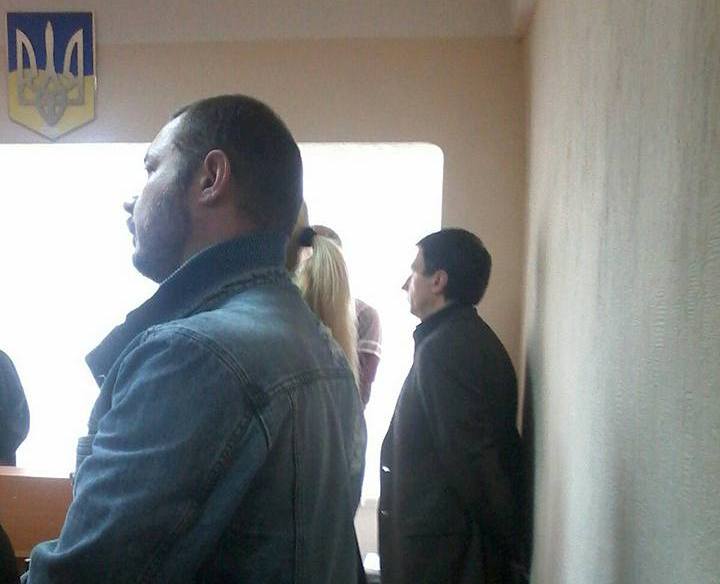 “Ideology of the homodictatorship is imposed upon our children”. Vitalii Kyrylchuk expressed a similar view in his last speech. He also didn’t mince his words. “Yes, that day I was on Obolon embankment to express my view peacefully because I am a devout person, a Christian. I also respect the opinion of my friends and brothers, who serve on the front line and the Ukrainian people in general. I understand there is such a phenomenon as homosexuality, but it shouldn’t be propaganda. They have a location, where they spend their time freely. Nobody has ever disturbed them, and nobody disturbs. But it is unacceptable to hold parades, so-called Equality Marches, when there is the war in the country”, began his speech the defendant.

Then he started to accuse the Ukrainian authorities. According to him, the authority supporting such LGBT activities as the Equality March, just throw dust in the eyes of our European partners having the sole purpose — to make hay. “The country has suspended holding any public events. Even there weren’t such New Year celebrations for the children as they used to be. Why was the parade of the perverts allowed? Because it was necessary to distract the European Parliament to get the next tranche from the IMF, which fell as always, in the pockets of the powers that be and was transferred to the offshore zones? Maybe, we should pursue a different path on our way to Europe by increasing the social level and fostering a society based on the spirituality to prevent the violence in the families, when children change their orientation. By the way, the findings of the experts revealed that it is a psychological problem, most homosexuals faced being brought in by the dysfunctional families“, Kyrylchuk shared his dubious knowledge of sexology.

Read also: How to outargue a homophobe using scientific evidence

He concluded by reflecting on the Christian upbringing and homodictatorship.  “What I want to say and perhaps what is most important is that our people are a devout society, and I am proud of that. Any propaganda of the community called “lesbians, gays, bisexuals and transgenders” is contrary to the Christian upbringing, what we teach our children. Besides, all world religions condemn homosexuality. Why isn’t the majority asked? Why is the ideology of homodictatorship imposed upon our children? Let’s end the war, recover from these difficult times, overcome poverty, and then we shall look whether our people are ready to accept such changes”, concluded Kyrylchuk. 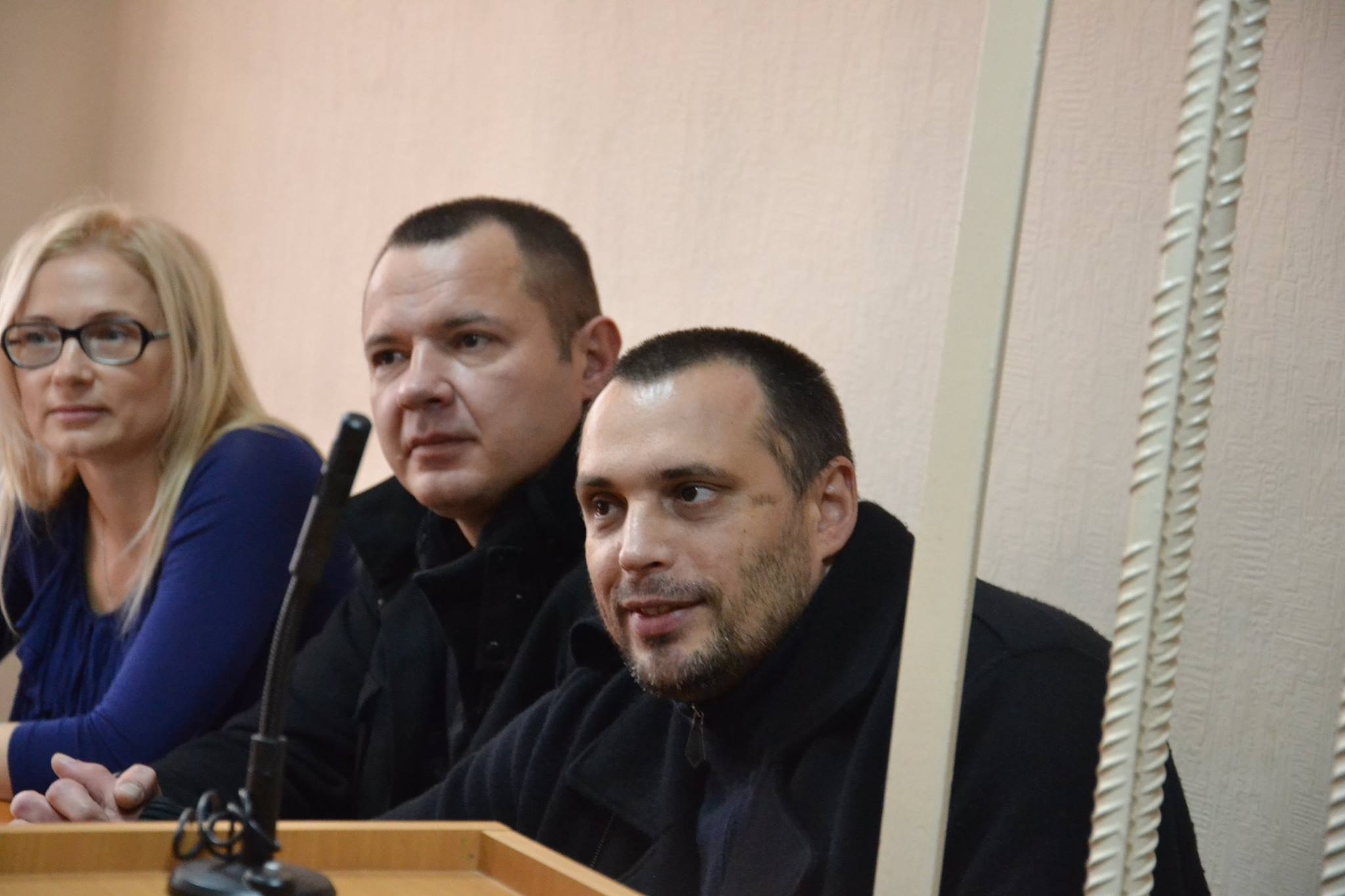 The only mistake of the defendants. Rostyslav Golosii, the lawyer of Viliamovskyi and и Protokovylo also considered it necessary to put in a good word for the defendants. He spoke in a roundabout way retelling detailed the statement of the Kyiv Mayor Vitallii Klychko before the Equality March. At that time, the Kyiv Mayor urged the political forces and non-governmental organizations not to instigate hostility and create another confrontation in the society around the Equality March.
“He addressed the sponsors of this march and explained to them that today, when there is the war in the East of Ukraine, it is an inappropriate moment for the public events, especially for such ones, which the society perceives ambiguously”, reminded the lawyer.

Read also: “I am gay. I have been in the ATO zone. I have seen death. And I am a patriot of my country”

Golosii claimed that the statement of Klychko reflected the opinion of millions of the voters, who voted for him and his political force. “In other words, it was the message of several millions of people to this community of gays, lesbians and whoever else is there, said the lawyer.  — “Despite such an appeal, this community with a corresponding abbreviation decided to hold its event.”

Then the judge interrupted the lawyer asking him not to go into details of the background of the Equality March and to focus on the key topic. The lawyer continued with the insightful conclusions at once.

“My clients have been victims of the provocation, Klychko talked about, said Golosii. — Unlike persons, who conducted so-called Equality March, the only mistake of my clients and other defendants was that before holding their own event, they didn’t apply for a corresponding permit from Kyiv City administration to hold their own activity in order to express their position and consequently to receive protection from the law enforcement officers.”

“My clients pleaded guilty, summed up the lawyer. — “Confession of guilt and their readiness to accept punishment, even under such circumstances manifests a high level of legal awareness.”

“I don’t feel guilty”. During recess, when the judge was the chambers, Kyrylo Viliamovskyi, commenting the developments in the informal circumstances asked to note that actually he did not admit his guilt. “I don’t feel guilty. I agreed to plead guilty with the sole purpose to speed up proceedings and go to the front line. Other guys also agreed to plead guilty in order not to spin out time”, he explained, being confident that participation in combat can be an excuse for the offences. Interestingly, the young man came to the hearing in a camouflage uniform with a patch of Misanthropic Division. 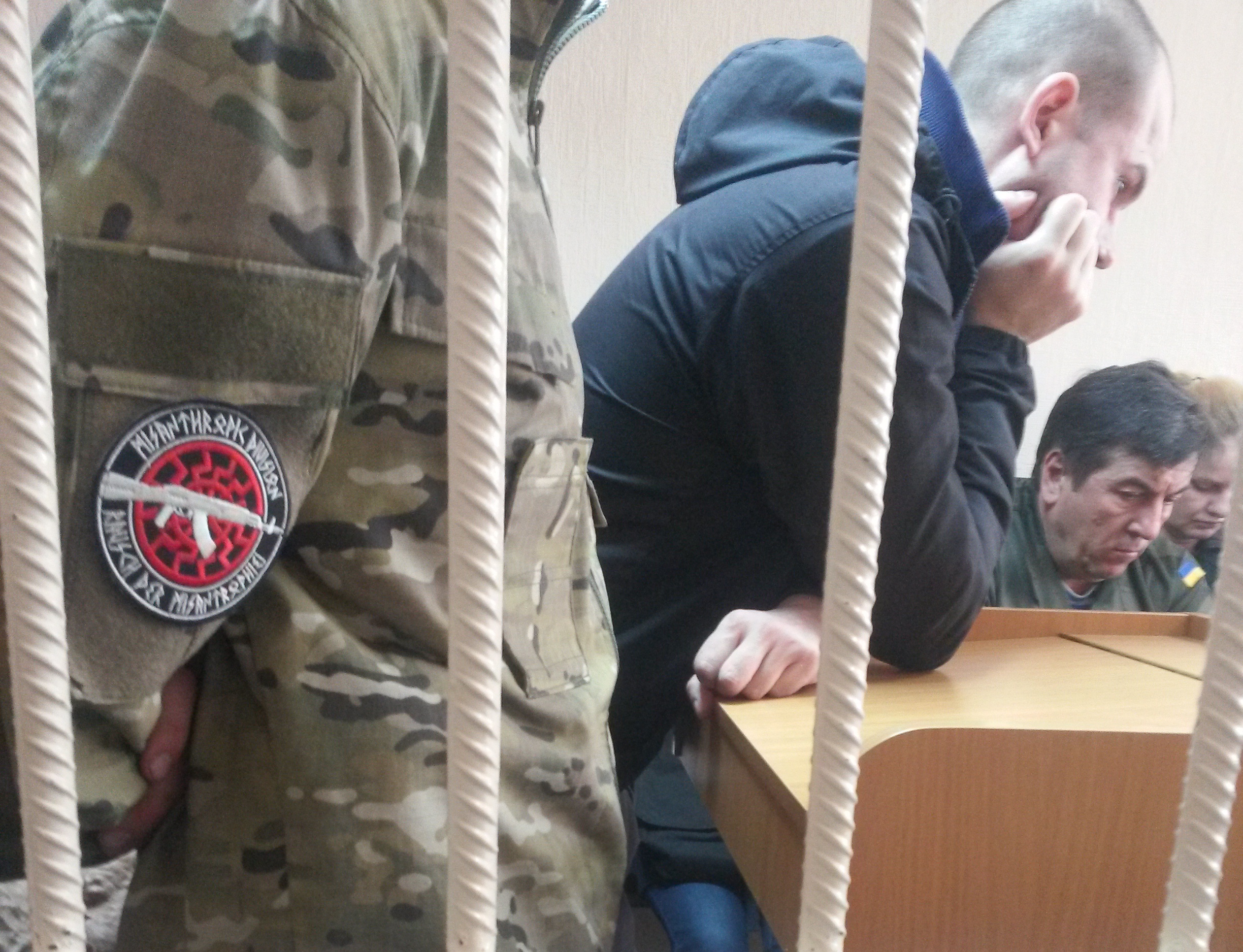 Read also: Neo-Nazi charged themselves with excesses in Lviv

With its unduly moderate sentence, the court favoured in fact the violent tactics of the radicals and confirmed their confidence in own impunity. The only conclusion they will make based on this trial – one may continue to attack the activities they don’t like, to throw explosives at people, because actually, it is possible to escape responsibility, if “to repent” on time.

As we have informed, on June 6, 2015 the radical homophobes attacked the Equality March. The young people used tear gas against the crowd and threw smoke grenades and firecrackers with shrapnel. Later they organized a “safari” for the participants of the march, who were going back home. Nine activists and 11 law enforcement officers got hurt. One officer was badly injured and narrowly escaped death thanks to one female participant, who administered first aid.

Besides us, the trial was observed by the representatives of OSCE and UNO. The international organizations published the court hearing reports on their official websites. The OSCE Mission in Ukraine sent the case materials to the headquarters.