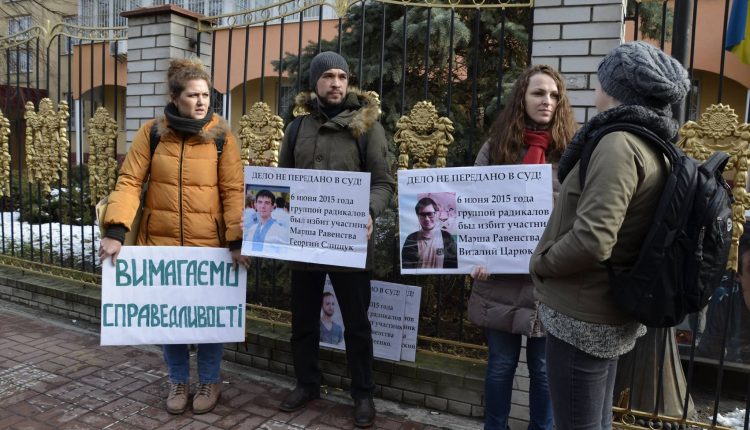 The Equality March case in the court: about “hysterics of LGBT”, gays in the ATO, and a penalty for the violence (VIDEO, PHOTO)

On Friday, February 12, a preliminary hearing in the case of the attacks on the participants of the Equality March took place in Obolon district court. As we wrote earlier, it is the only criminal proceeding related to the attacks on the march which had come to trial.

The accused persons are members of the Right Sector: 26-year-old Oleksii Protokovylo, 41-year-old Danylo Dashevskyi, 21-year-old Kyrylo Viliamovskyi and 38-year-old Vitalii Kyrylchuk. They are charged with hooliganism (Part 4 of the Article 296 of the Criminal Code of Ukraine. Hate isn’t being considered as a motivation. Dashevskyi and Kyrylchuk were represented in the court by the lawyer Viktoriia Yelmanova. The lawyer of two other accused couldn’t be present for health reasons.

Read also: The hearing on the Equality March: attempt no.3 – with picket and radicals (ru)

During the hearing Yelmanova presented a motion to send the information back to the prosecutor given that it has serious shortcomings. So, among them, according to the lawyer, is the incorrect street address of some accused persons and that the document doesn’t contain a specific identification of the objective element and mental element in crime, crime components and other qualifying signs. The court held the motion of the defense to be unfounded and scheduled the next hearing for February 19. Another court hearing will be on March 4. The accused don’t see anything wrong with the attacks on the Equality March and… advise the LGBT to go to the ATO.  “We are against publicity and propaganda. We don’t attend their gay clubs … Let them create their own battalion and let them go to the ATO. I haven’t seen them there“, told, for example, Vitalii Kyrylchuk to Human Rights Information Center. 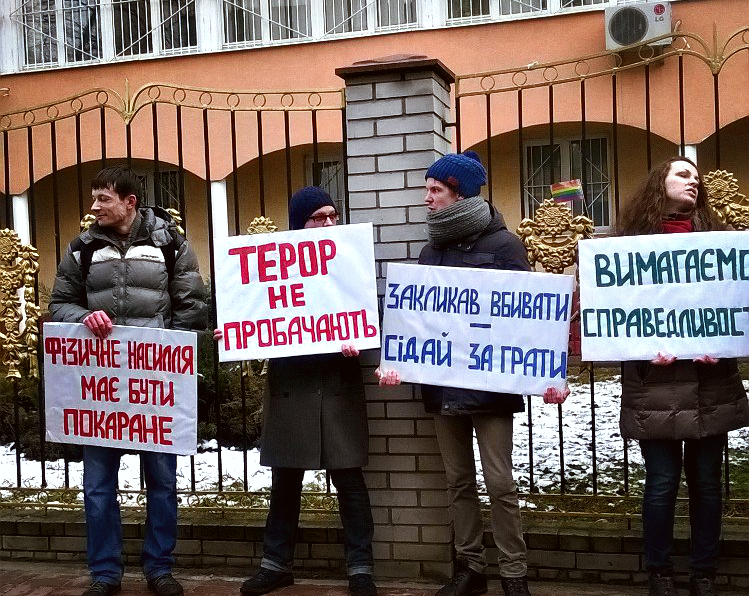 As planned, the LGBT activists came to the court demanding to fairly punish the persons responsible for the attacks on the Equality March. About 15 activists, who gathered in front of the court building, brought the posters with names of the participants being attacked, and whose cases weren’t brought to trial, and posters about human rights in general. “Nobody of the attackers has yet been held responsible. There were only suspended sentences”, said the project coordinator of Freedom House Zoryan Kis to Human Rights Information Center.  “We would appreciate if the court considers homophobic and transphobic motives when deciding. We require a real punishment”, says the spokeswoman of Gay Alliance Ukraine Alona Ganych.

Read also: The court session on the attacks on the Equality March was postponed again (VIDEO) 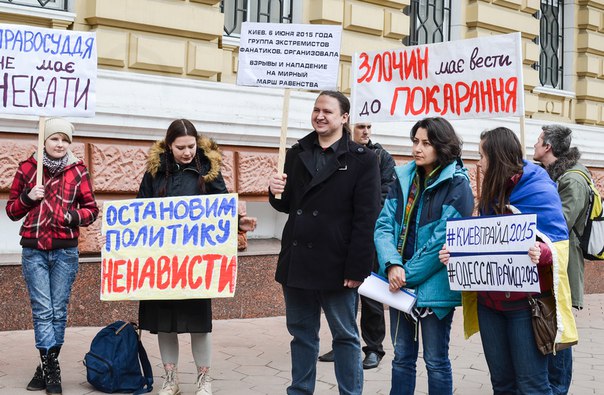 The rally in Kyiv was supported by Odesa activists. They organized a Solidarity Picket against the LGBT community discrimination in Ukraine. According to the organizer of the picket, the activist Anna Leonova, the attackers on the participants of the Equality March should be specifically tried for the attack and hooliganism, and not for the disobeying the orders from police. Furthermore, they decided to establish a Working group on prevention of crimes on the grounds of homophobia within the Main Department of National Police in Odesa region. “In Odesa all the attackers (13 persons) on the community centre during the Pride were detained and identified”, underlines Leonova to Reporter. We couldn’t get any details of this case within more than half a year. Today we have received a document saying they were charged with administrative offences – five persons paid 51 hryvnia as penalty, seven others just got the warning”.

Activists in Zaporizhia also spoke up for the fair trial. They held an art flash mob with hashtags #CrimeShouldBePunished #HumanRightsForLGBT and # KyivPride2015 to support the event in Kyiv. 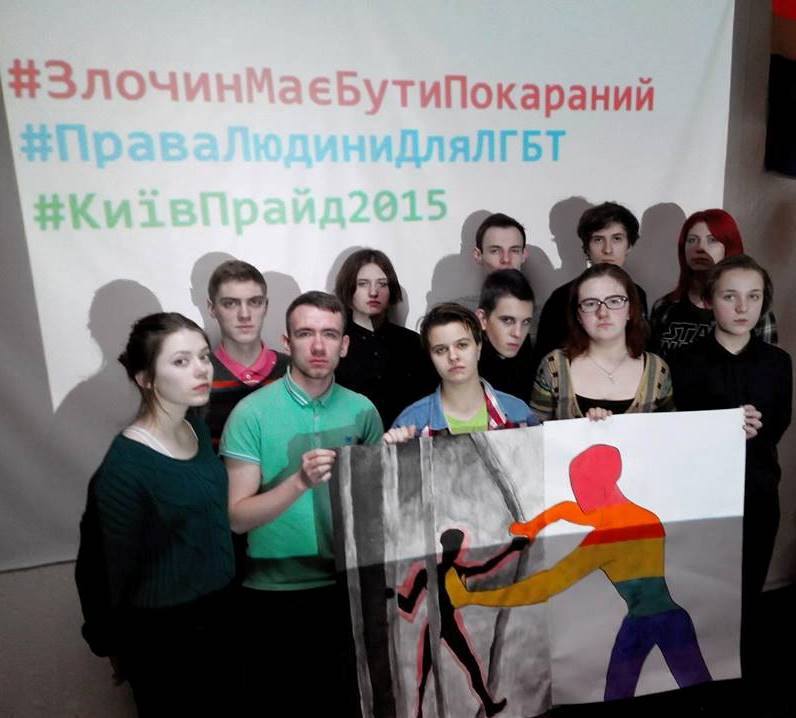 “LGBT have a fit of hysterics“

The members of the Right Sector came also to the court building. This time, however, they were without posters (during the picket on December 25 they used posters about “gay propaganda”). They tried to attend the hearing, but the police didn’t let them in, saying that the courtroom is too small. The far-rightists explained that they came to support the “sworn brothers”, who hadn’t been involved in the attacks on the Equality March but had just been caught in the “surrounding area“. Being indignant that the police didn’t let them in, they accused the police officers of having “the same level of morality” as the LGBT community.

The day before the trial the website of Right Sector accused the LGBT of tending to incriminate the people for being members of the organization of the nationalists. “It is about to frame up a case and to put the fighters of the Right Sector in prison. Further speculation is being fuelled by the members of the “grants-eating“ LGBT communities, who have a fit of hysterics and require to randomly put the guys in prison. The main thing a person should be a member of the Right Sector“, complain the far-rightists.

On the video by Channel 17 devoted to the Friday event and the trial can be heard more aggressive statements of the nationalists about the LGBT activists and police.

The LGBT community will continue to follow the trial and require the investigation of all cases of the attacks on the Equality March in 2015.

As we have informed, on June 6 the radical homophobes attacked the Equality March. The nationalists used tear gas against the crowd and threw smoke grenades and firecrackers with shrapnel. Later they organized a “safari” for the participants of the march, who were going back home. Nine activists and 11 law enforcement officers got hurt, one of them badly injured by the actions of the radicals.