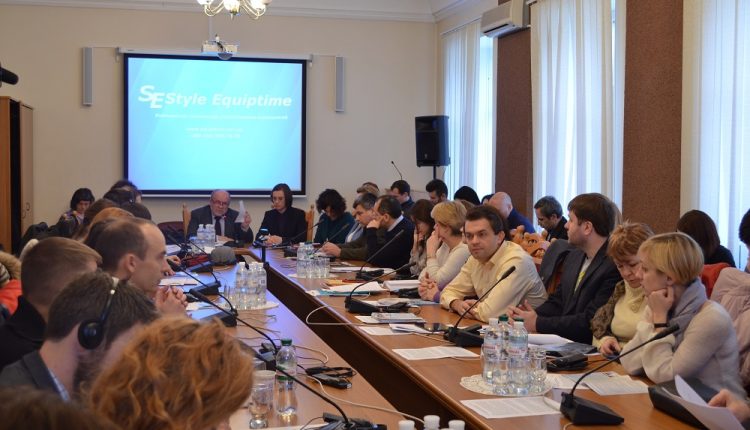 Playing with the Constitution and “new phenomenon of LGBT”

On Friday the experts were discussing possible introduction of ban on discrimination on the grounds of sexual orientation. New wording of right to marry from the project of the Constitution that was confirmed by the Constitution Commission also was mentioned  in course of the discussion. Let’s recall that All-Ukrainian Council of Churches and other “custodians of public morals” are indignant at the idea of taking the description of a marriage as voluntary alliance of man and woman out of the law (instead the working group offers to write that the right to marry and to make family is guaranteed by the law and each partner has equal rights and duties in marriage and family). Summarizing this Friday meeting we may draw a simple conclusion – LGBT community is half defeated in this fight, not least because of its passive position.

The conference with its long and complicated title (Status of Minorities and Indigenous People in Ukrainian Legislation in the Context of Project of Alterations and Amendments to the Constitution of Ukraine Preparation) looked like a meeting for the sake of appearance from the very beginning. First, Constitution Commission decided not to include issue of sexual orientation in the project of new constitutional legislation (the text was sent to Parliament Speaker and President in July – author’s note). More accurately, ban on discrimination was included in the project (ru) but under pressure of the church it was taken out of it (ru). Secondly, opening the meeting, the head of the working group and ex-judge of European court Volodymyr Butkevych ensured the participants that the Commission didn’t found enough legal reasons to include such ground as sexual orientation to the Constitution. He explained this decision telling that there’s no clear understanding of the problem, and it’s impossible to list all vulnerable groups in the Constitution. But the topic is still quite pressing so the people were invited to the meeting.

“NEW PHENOMENON.” LGBT community heard nothing new during the discussion. For example, one of the main speakers Maryna Medvedeva, Doctor of Juridical Science, said that same-sex couple can’t have rights equal to those of heterosexual family, which is “explained by the nature of marriage and family’s ability to recreate itself.” One more thought of this academic lady also couldn’t leave us cold: “Phenomenon of LGBT is new and… it has to undergo detailed bioethical assessment.” 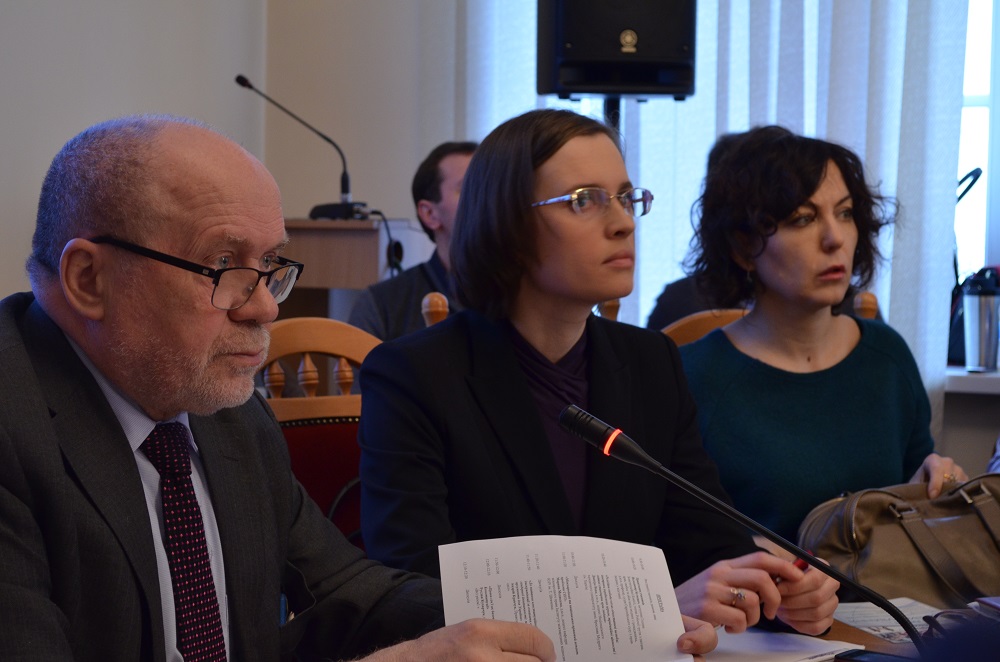 In the centre – Medvedeva, that Butkevych calls one of the best experts in human rights

We won’t go into details and remember Ancient Rome, but this Doctor of Juridical Science really should re-read some history books in her spare time. Medvedeva also thinks that LGBT issues may threaten rights of children, freedom of religion, public order and moral system. In particular, she thinks that having Equality Marches, legalizing same-sex marriages or partnerships and same-sex couples adopting babies violate child’s rights for traditional family and national cultural identity. What is more, Medvedeva recommended Ukraine to follow Lithuania and Russia in adopting legislation that will ban propaganda of “non-traditional relationships”.

EUROPEAN COURT AGAINST CHURCHES. Second main speaker, candidate of legal sciences Dmytro Vovk insisted on protecting same-sex couples rights including possibility of same-sex partnerships registration but his advice was not heeded. The lawyer underlined that the opinion of the church can’t be the only one in legislation issues. While putting forward his arguments, Vovk reminded of the case Oliari and Others v. Italy (July 2015) – three homosexual couples made a complaint because they had no chance to get married due to the Italian legislation. European Court of Human Rights pointed out in its decision that the state must provide certain legal form for regulation of same-sex relationships. These decisions are obligatory for Ukraine as well. “Ukraine is a secular state with ideology pluralism secured at the level of the Constitution. So religious and moral arguments which always refer to ideology, can’t make reasonable grounds to implement them to the Constitution,” the lawyer underlined. 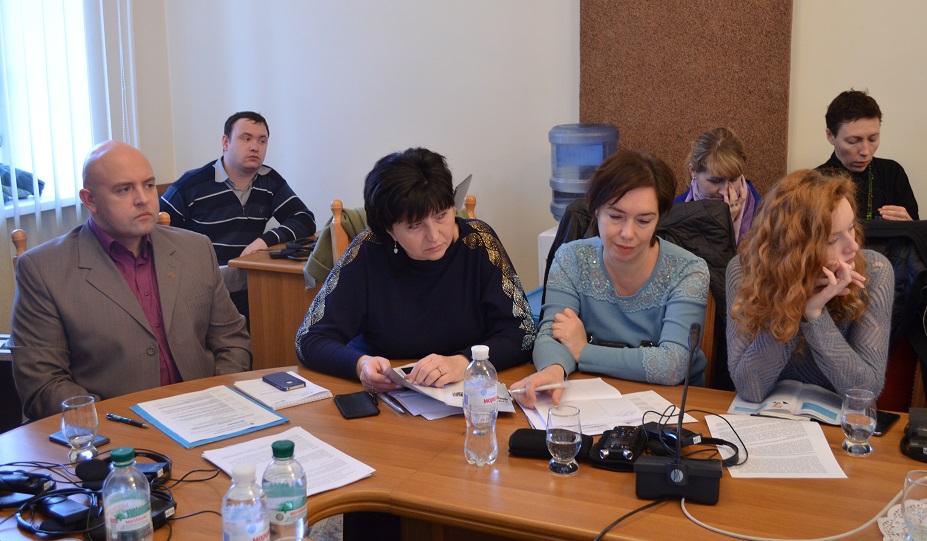 Among others Andrii Kravchuk from Nash Mir human rights LGBT centre, Matthew Schaaf from Freedom House, European Commission expert in gender equality and non-discrimination Romanita Iordache and human rights adviser of US Embassy in Ukraine Brian Campbell made a stand for protecting LGBT rights in the Constitution.

“SODOM AND KITTIES.” Archpriest Roman Malaniak, the head of All Together! Civic movement Ruslan Kukharchuk, Vitalii Orlov from Ukraine for Family alliance, MP Pavlo Ungurian and candidate of psychological sciences Liudmila Gridkovets were most active among the custodians of public morals. The reasoning of the latter is worth to be mentioned separately.

Read also: “Don’t cut out the family!” – about two dozens of “traditional values” backers protested by the Parliament (ru)

Expectedly, Malaniak appealed to the religion: “When God created a man, he also created a woman who is his assistant”, “A Christian who supports and approves legalization of Sodom sin fits under the curse of Sodom”, “Church is against seeing this way of life as natural and normal one.” Kukharchuk in his turn said that sexual orientation is totally fictional and artificial term. “The question of sexual orientation and definition of marriage as the alliance of man and woman is the part of national security… Expansion and normalization of homosexualism leads to HIV/AIDS expansion,” the activist is sure. It couldn’t go without zoophilia also. “We will reach the point where narcotic orientation will be included to the Constitution and afterwards the lovers of kitties and doggies also,” Orlov thinks. Gridkovets used such wonderful wording as “homosexual disorder” and “evolutionary dead-end”. As the “expert” in psychology thinks “gay parades are the example of the sexual violence” and “homosexual community causes the increase in pedophilia.” Members of Right Sector, famous for its intolerance for LGBT were among the audience of the conference. 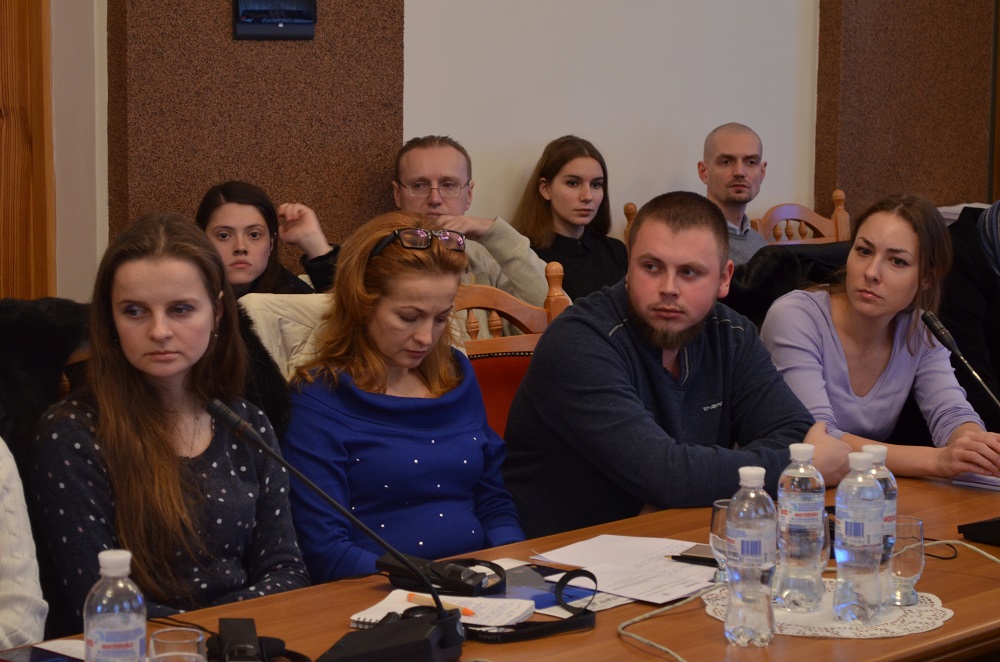 HALF-DEFEAT. All reports and arguments from the conference will be given to the corresponding Parliamentary Commissions and to the Speaker and President. But the working group finished preparations of the Constitution project and its decision couldn’t be changed, Butkevych pointed out. “After today meeting I would have to report on the working group that majority didn’t support including “sexual orientation” term to the Constitution,” Butkevych concluded. Despite the fact that the main problem of discussion was settled in their favour, the backers of “traditional values” were extremely indignant as they didn’t manage to make the working group keep old definition of marriage as the alliance of man and woman in the Constitution. Fighters for public morals called taking this wording out a crime. “You will be accountable to God and to people. The catastrophe is waiting to happen. You won’t make it into history, you will get into mess!” they shouted to Butkevych.

Read also: Council of Churches suggested to ban abortion and gay marriages at the constitutional level

Talking about our amendment to the Constitution, we can say that the conference was clearly fit in the decision of the working group but it shouldn’t be the only one to blame. LGBT community itself was very passive and didn’t try hard enough to influence the outcome of the case. The petition of the Presidential website (ru) regarding sexual orientation in the project of the Constitution gathered only few thousands signatures and Butkevych mentioned it. It we are not ready to fight for our rights, it’s naïve to hope that authorities will bring them to us on a silver platter.