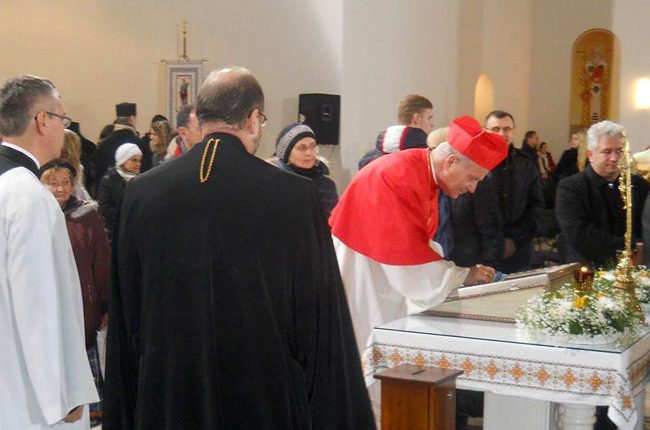 Ukrainian activists handed a letter to Cardinal Christoph Schonborn, who is loyal to LGBT

On Wednesday, December 10th, one of the leading bishops of the Catholic Church, the Archbishop of Vienna, Christoph Schönborn visited Ukraine.

Schönborn, who was one of the most likely candidates the papal throne, is well-known for his liberal attitude towards gays and lesbians, and his positive responses about the members of the LGBT community on many aspects. In particular, after Conchita Wurst won the Eurovision Song Contest, the Cardinal said: "I am glad that Tom Neuwirth became so successful with his artistic alter ego Conchita Wurst and I will pray for him. As we all know, multicolority and diversity are present in the garden of God. Not everyone born as a man feels like a man. The same applies to women. These people deserve respect as all of us human beings do".

Schönborn came to Kyiv to the 25th anniversary of the legalization and the revival of the Ukrainian Greek Catholic Church. And during the visit he received a letter with a request to facilitate the processes in support of LGBT people which had started in the local church communities by the efforts of Ukrainian activists.

Under an initiative to ensure respect for LGBT believers on the eve of the Cardinal's visit was held a meeting. In the meeting participated Larissa Sarah Bogachik (Centre "Dialogue of Cultures XXI"), Alexander Bulich, representatives of the public organization of LGBT Christians "Queer Credo Union" Boris Homa and Ivan Savchenko, as well as an Orthodox priest Volodymyr, who has significant experience in the area of spiritual support for LGBT parishioners.

According to Larissa Sarah Bogachik, the author of the initiative, this dialogue aimed at developing a number of activities for priests of the Catholic Church and other interested denominations, under which they could receive trustworthy information about LGBT people and meet believers from the community in order to get to know them better.
It is not a secret that for many Christian denominations in Ukraine LGBT parishioners become a real challenge, while the believers among LGBT often receive a traumatic experience when meeting a priest, who are not ready to discuss topics related to homosexuality and transgenderness without condemnation. However, lately we witnessed significant progress in this area. Thus, Roman Pope Francis regularly comes up with new initiatives aimed at making the Church accepting LGBT Catholics.

In order to make the dialogue between representatives of the queer community and the Catholic Church more productive, the support of the church hierarchy is required. That is why the activists appealed to Christoph Schönborn, taking the opportunity to talk with one of the most loyal to the LGBT people representative of the Catholic Church hierarchy. Larissa Sarah Bogachik, Boris Homa, Roman Illyash and Ivan Savchenko handed the letter to the Cardinal and obtained a promise to assist in return.

"I believe it is important that people who belong to LGBT community had a right to choose – to be an atheist or a believer, – Bogachik says. – To me, though I belong to religious people, it doesn't seem a problem when someone is an atheist. However, it should be his or her free choice, not a forced action in response to the inadequate attitude from the church. At the moment in Ukraine, we often face a situation where gay or transgender people pushed out from the different denominations, where they are not able to find a respectful attitude. At the same time I witnessed how it can be done differently. In the USA, the Catholic Church has been calling upon respectful attitudes. Among Catholics in the USA percentage of support for same-sex marriages is higher than the average one among the USA citizens in general, and Sunday mass in the gay area at Castro gathers full house of the local LGBT community".

Let us recall that during recently held extraordinary Synod in the Vaticanan was made an attempt to put to a vote a document suggesting to treat LGBT believers with a great friendliness, since as it was earlier said, they "have many talents and qualities useful to a religious community". However they could not adopt the document: it did not get the required two-thirds of majority votes. The progressive bishops, such as Christoph Schönborn, expressed the hope that the changes could be achieved during the next Synod.

Speaking to journalists in the Vatican Christoph Schönborn announced that he personally know a few "absolutely stunning gays". According to the Cardinal, he knows an Austrian same sex couple, whose mutual support in the illness inspired him a lot. "The basic principle is that first of all we appreciate a person and not their sexual attraction," – said then the Archbishop of Vienna.