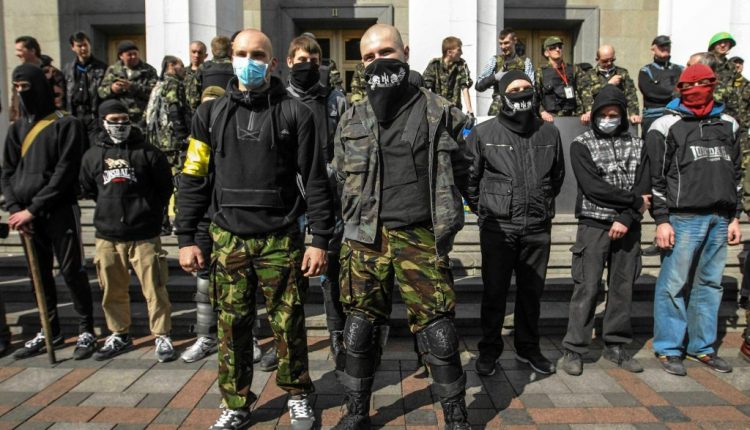 Organization “Trident” (Tryzub), which is part of the “Right Sector”, threatening LGBT activists to end up like Buzyna and Kalashnikov

Nationalist organization "Tryzub" (Trident) – that at one time initiated the creation of the "Right Sector", switched from calling to violence against gays, lesbians, bisexuals and transgender people to threatening LGBT activists.

"Hopes of degenerates that they could unpunishably go about their business ultimately would be in vain! Despite the war in the East, right-wing activists even today carry out major actions in the rear (for example – attempts at Buzyna and Kalashnikov, or the recent elimination of two employees of "Berkut"). They will pay for everything, including for the moral decay of our society!" – reported on the website of the organization.

Right-wing radicals released their next homophobic statement as their respond to the launched informational and educational campagin by UPO "Gay Alliance Ukraine" – "Say it right". "In Kryvyi Rih city bastards from one of the grant-eaters organizations installed a billboard with the propaganda of homosexuality. The billboard encourages to call these perverts not pederasts, sodomites or "queers", but "gays", – said the nationalists in their statement.

"The graphic design of billboards is quite indicative: two normal couples are pictured in a grey colors while couple of pederasts displayed in the foreground – is in color", – marked in the statement. It is symptomatic that the interpretation of the banner by Trident folks is not very different from the version by the mouthpiece of the Russian propaganda – LifeNews, which earlier covering the appearance of these billboards also wrote that in copairson to the color image of two men embracing "traditional couples literally faded – to black-and-white snapshot".

"National liberals", taking advantage of the fact that currently there is a war in the East, have been increasing the scale of their actions, believes Trident members. Now the main forces of the nationalist movement involved in responding to the Russian aggression and they have no time to be engaged in dealing with "this kind of communities", but the Judgment Day of paying back all the bills will come, say the radicals.

A similar statement has also appeared on the website of the Right Sector.

Let us remind you that the "Tryzub" (Trident) organization named after Stepan Banders was created by Dmytro Yarosh in 1994 and since that time Yarosh himself has occupied different positions in it. It is namely the Trident organization initiated the creation of the "Right Sector" after the events of November 30, 2014, when the first forceful dispersal of EuroMaidan took place. The structure of the "Right Sector" included members of organizations "Tryzub", UNA-UNSO and the "Carpathian Sich". Yarosh became the head of the association.