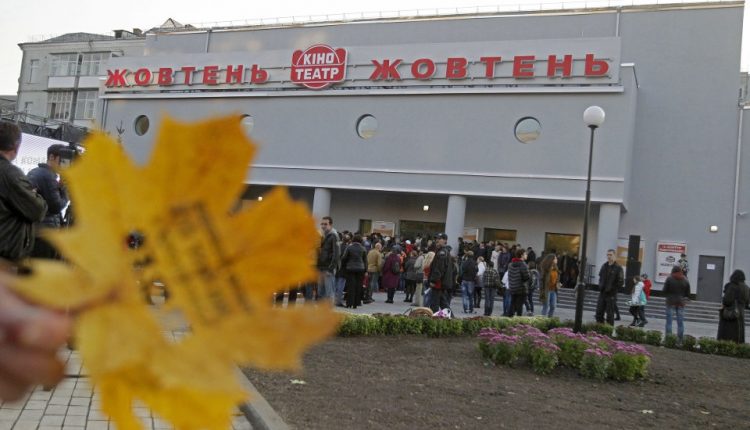 LGBT activists came to the opening of the renewed Zhovten cinema with a kind of flashmob – they made sunlight dapples(sunny bunnies in Russian) dancing on the cinema façade to remind why it had been set on fire and to express disagreement with Sunny Bunny queer movie program being shifted to another cinema. This flashmob was organized by the public person Zoryan Kis.

Zhovten cinema was opened after reconstruction on October 18. Kyiv mayor VitaliKlitchko, mass-media, celebrities in the field of culture, public characters and politicians were present at the event. Those citizens and guests of Kyiv who had invitations could visit pre-opening show of the Youth movie by Paolo Sorrentino free of charge.

Kyiv mayor declared that this was “real feast” not only for those who live on Podil district but for all people of Kyiv and underlined that the cinema met all modern criteria and passed the standards, in particular, it met the needs of people with disabilities. Vitali Klitchko turned his back on the reasons of Zhovten cinema arson that had happened last year. Save Zhovten! non-governmental initiative was also omitted in his speech.

According to Vitali Klitchko the authorities of the capital advance the initiative of assigning the status of historic monument to the cinema building. Let’s recall that this demand was listed among other ones by the members of the Save Zhovten! initiative. On October 31, 2014 the activists collected almost 2000 signatures of Kyiv citizens under the following demands to the authorities:

As we informed, despite the reconstruction and opening of the cinema it wouldn’t host the shows of Sunny Bunny queer program movies of the Molodist International Film Festival. That is, in point of fact, fulfilling the requirements of the terrorists who have set the cinema on fire.

Let’s remind that the cinema was closed for reconstruction after the arson committed because of hatred of LGBT. The accused Roman Portianko and OlehRybalchenko confessed that they threw smoke grenades to the hall during the show of Summer Nights queer movie, showing their “protest against queer propaganda”. On October 5 Holosiivodistrict court put the accused on 2 and 3 years of probation.