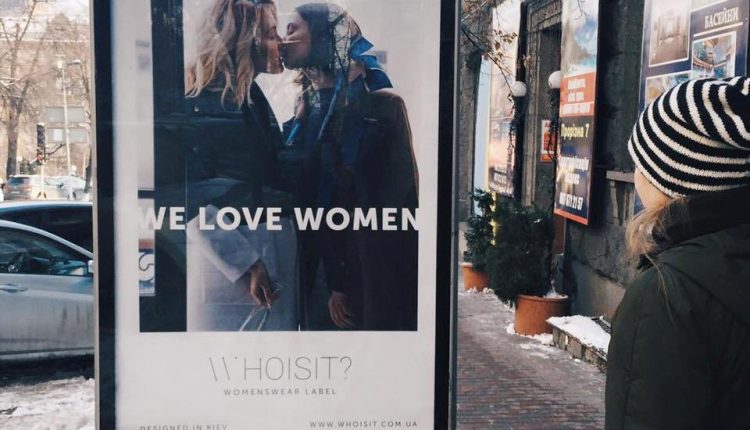 Who is it?: Our advertising about a spontaneous passion beyond gender and frames (PHOTO)

Kyiv-based womenswear studio Who is it? has launched a bold advertising campaign showing two girls kissing each other. WE LOVE WOMEN, the slogan says.

According to the studio, the company’s attitude to the LGBT people is more than tolerant.

“Homosexuality is a natural phenomenon and an integral part of today’s world culture. And we don’t think for a moment that somebody can perceive this visual imagery as something unnatural or vulgar. Our advertising is about a spontaneous passion beyond gender and frames“, they told to Gay Alliance Ukraine.

However, the female designers note that their new advertising focuses on interesting clothes and not on same-sex relationships. “We neither state nor propagate anything,” they underline.

A series of prints for the brand was made by the creative team of BART&FINK.

Who is it? is a young Ukrainian fashion studio. According to the female founders, they want to show in the collections their own idea of beauty, femininity and naturalness.

The female designers follow the simple principles: no fake, no names, no China.

By the way, one of these ideas is behind the name of the brand – Who is it? – you won’t find any names on the label. The creators of the brand consider to be more honest to sell clothes but not the names and surnames on them.

The designers describe their female purchaser to be a self-confident girl who primarily wants to like herself and to be special.

The contest of cartoons dedicated to human rights started