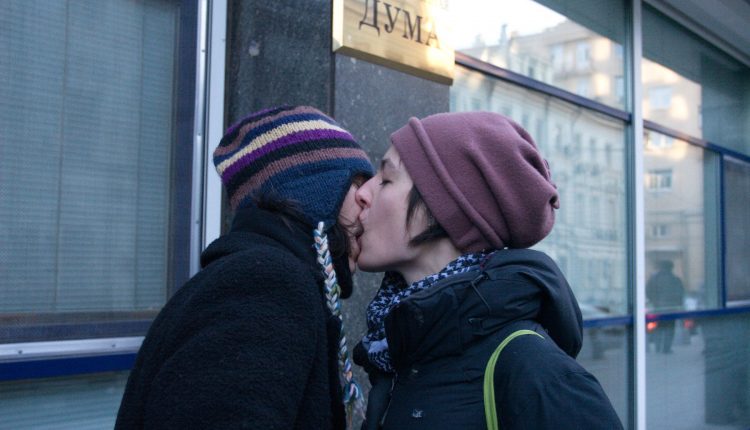 Kissing Day by the State Duma building in 2013
Ukrainian news

On February 19 State Duma of the Russian Federation declined in first reading the shameful bill that stipulated fines and detentions for “showing non-traditional sexual relationships in public” that got notorious as “bill that bans coming outs”, as Slon informed. 101 MPs voted for the bill, no one voted against it and the document did not receive the required support of 226 MPs.

Before voting, one of the bill’s authors communist Ivan Nikitchuk delivered a fiery speech about special harm that gay propaganda caused, as he beleived, to the national security of Russia.

The Committee of Constitutional Legislation and Nation Building of State Duma recommended declining the bill before because of existing law on ban of so-called “gay propaganda”. Let’s recall that MPs of CPRF (Communist Party of Russian Federation) Ivan Nikitchuk and Nikolai Arefiev offer to impose fines of RUB 4000-5000 for “public showing of somebody’s perverted sexual preferences”. The same actions in educational establishments, cultural institutions or public agencies are to be punished with 15 days of arrest, according to this communists’ bill.

As Nikitchuk supposed, any public showing of homosexual relationships was to be included, such as “hugging, kissing, holding hands”. Homosexuality is “socially caused disease that is subject to social contagion” as the explanatory note states.

On the eve of the bill reading in State Duma Mr. Nikitchuk was glad to give interviews to Russian mass-media about “scum that comes from the West”. “This bill doesn’t forbid them to do “this” – they may put stamen to stamen under their blankets,” the people’s deputy told one of the editions.

In addition Nikitchuk believes that his law brings no harm. “15 days in my law are given to a person as the time to think,” he explained.

Dynamo Kyiv football club: We are against any kind of discrimination