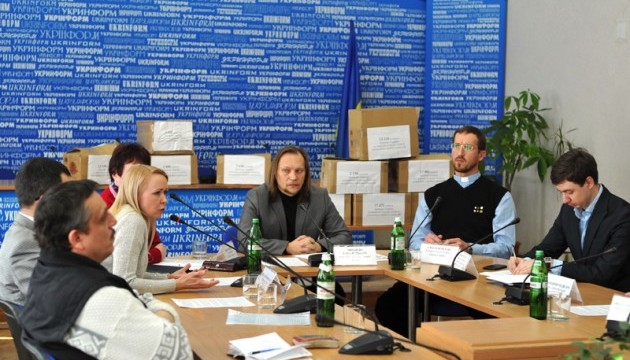 A group of activist parishioners of Uniate and Roman Catholic churches prepared statement for the President, Verkhovna Rada and the government demanding to “protect traditional family values” as Ukrinform information agency told. This address, according to its authors, signed by more than 100 thousands believers demands not to introduce such wordings as “sexual orientation” and “gender identity” to the Constitution.

“One of the main points of our address is protection of traditional family values. We believe that marriage is a family union of a man and a woman based on mutual consent. We opened this question because the projects of changes that appeared now wished to exclude it (marriage – editor’s note) being a man and a woman union. This allegedly liberalizes the Constitution,” claimed Mykhailo Kanafotskyi, the coordinator of the Christian activists’ group on the roundtable discussion of this issue.

“Traditional values” supporters appeal to the ban on same-sex marriages and abortions existing in the legislation of some countries of the European Union.

“European countries are not the same in defining marriage and family, in their approach to abortions. Some EU countries ban same-sex marriages,” gave his reasons Maxym Vasin, the executive director of NGO Institute for Religious Freedom. He also pointed out that the propositions in the abovementioned address showed the position that was previously announce by the All-Ukrainian Council of Churches and Religious Organizations.

Read also: Council of Churches suggested to ban abortion and gay marriages at the constitutional level

Let’s recall that literally couple of days ago the President of Ukraine Petro Poroshenko criticized “intolerance, lack of respect for people’s rights, religious fanaticism and homophobia” imposed by the “Russian world” to other countries. Poroshenko believes that those “alternative values” go against European culture and threaten the whole civilized world.