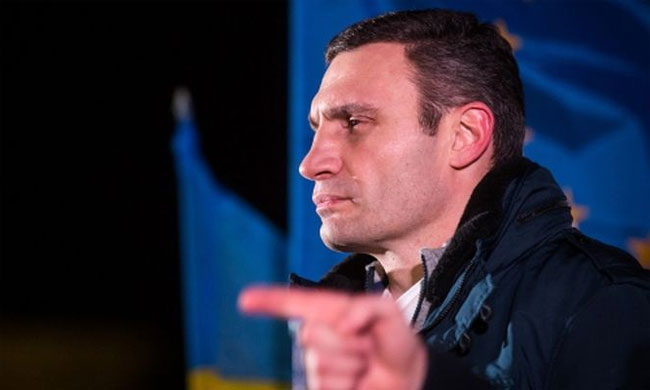 Vitali Klitschko, who refused to protect human rights of LGBT citizens, will be hand over the award “for commitment to democracy”

Оn April 23 in Cologne the Mayor of Kyiv city Vitali Klitschko will be handed over the Konrad Adenauer Award. This is reported by the press service of the Klitschko's party "UDAR" (Ukrainian Democratic Alliance for Reforms): according to the statement, Klitschko was chosen for an honorary award for his "commitment to peace and democracy in Ukraine". According to Korrespondent, the members of the Board of Trustees of the Award supported the decision unanimously noting that "extraordinary career of Vitali Klitschko starting from the world champion and to the mayor of the Ukrainian capital and his activity in addressing and solving a variety of problems struck the organizing committee of the Award".

At the same time the members of the Board of Trustees of the Award in all likelihood are not aware of the statement by the Mayor of Kyiv made last November during the Eurocitites Conference. During his presence at this forum Klitschko made it clear in reply to a question from a member of the municipality of Munich Lydia Dietrich that he will not stand up for human rights of LGBT citizens.

Dietrich approached Ukrainian politician for clarifications on the relevant issue after the Equality March in Kyiv was cancelled within the framework of KyivPride after Vitali Klitschko asked "not to hold a gay pride parade" and Kyiv city police stated that they would not be able to protect the participants of such action. Lydia Dietrich, who is long responsible for partnership issues between sister-cities of Kyiv and Munich, suggested Mr. Klitschko to support fight for human rights. To this Ukrainian politician replied that he considers human rights to be a good thing but he is not going to speak up for the rights of gays and lesbians.

"Even after the homophobic attack on movie theatre "Zhovten" Vitali Klitschko has not yet realized that human rights of LGBT people are being violated in Kyiv and in Ukraine. It is dramatic ignorance and neglect of basic rights, which, of course, LGBT people should have as everyone else", – stated Lydia Dietrich. Ukrainian LGBT activists expressed their concerns, including an executive director of UPO "Gay Alliance Ukraine" Taras Karasiichuk. In particular he spoke of it live on HromadskeTV.

Municipality of Cologne established the Konrad Adenauer Award in 2002 in memory of the former Lord Mayor of the city and the first Federal Chancellor of Germany. It is awarded every two years for "outstanding contribution and outstanding achievements in the organization of life and work in a large city: innovative and bold decisions in the development of the city, convenient for life, European integration, as well as the maintenance and strengthening of local government in the uniting Europe".