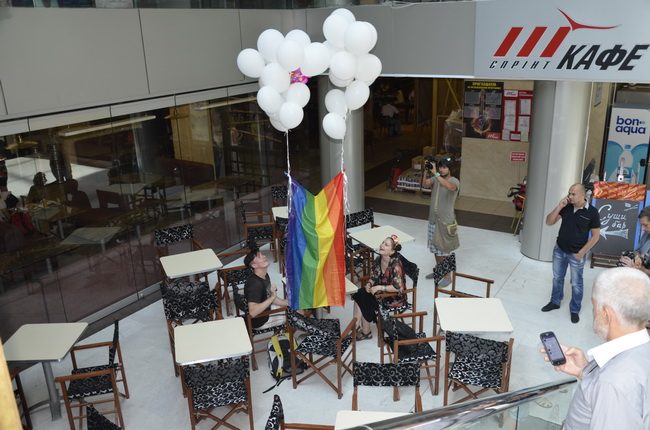 Activists of the queer culture festival organized a flash mob in the city center of Odesa. Initially the idea was quite simple – let the rainbow flag freely fly into the air with the balloons thus symbolizing freedom for LGBT people.

However, people with the balloons seemed very suspicious to law enforcement officials, so guys were accompanied by numerous police escort everywhere they went. Since all attempts to get to the place where a flash mob was planned were blocked the police, they decided to improvise.

After walking a bit around the city center, the activists stopped in one of the cafes in the shopping center "Athena". They hung the rainbow flag on balloons next to their table, and then the activists played a small show. One of the guys made a proposal to the other, and they kissed each other on the background of the flag.

A few minutes later the activists were approached by the two guards. They clarified who owns the helium balloons, and then carried the flag out into the street and threw it there. Policemen stood at the entrance to the shopping mall, and did not dare to approach the rainbow flag.

As we already informed, a few days ago individual pickets were held near Odesa City Hall. The activists stood there holding posters with human rights slogans "All worthy. All equal.", "Human Rights Above All", "Ukraine is united and we are part of it" and others. Also during the flash mob on Teschin bridge the participants of the festival honored the memory of LGBT people who died at the hands of homophobes.

All actions and flash mobs of the activists are of the human rights nature and aimed at drawing public attention to a general violation of human rights and LGBT rights in particular.