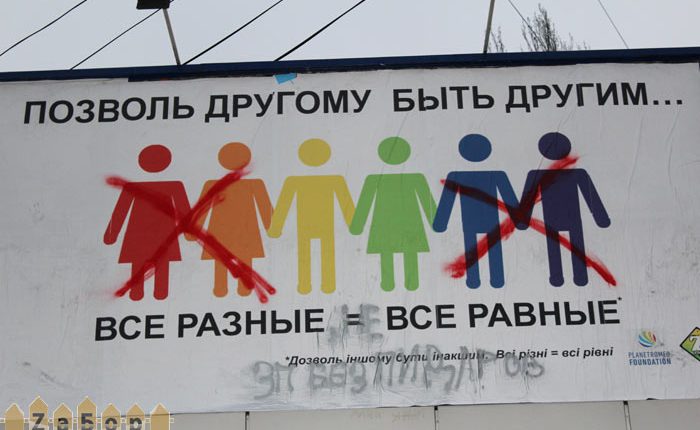 Legend on the photo: Let different be different. All are different = all are equal

Most Ukrainian citizens have a negative attitude towards gays and lesbians. It was shown in the results of Opinions and Views of Ukrainian Population research performed in February 2016 by Kyiv International Institute of Sociology and ordered by Nash Mir human right LGBT center.

According to the poll, 60% of Ukrainians are generally negative towards homosexual people. Only 4% have positive attitude towards them. Homophobic views are more widespread in the Western part of the country (67%) than in the Eastern one (51%) However the share of tolerant citizens is also higher there – 7% and 3% respectively.

Read also: “East and West are together”: Donbas, Kharkiv and Lviv – street survey about LGBT

Almost half Ukrainians (45%) believe that the homosexually orientated people must be limited in rights to some extent and only 33% of citizens support the equality of rights. Even most educated people have 47% of them keeping to certain limitations of rights for gays and lesbians. Those who stand for the equality of rights prevail only in case of schoolchildren and students – 49% against 36% of those who think that limitations are good.

At the same time only 5% Ukrainians support the idea of making registered partnerships legal for same-sex couples while 69% spoke against such idea and 19% don’t care about this issue.

Read also: GfK Ukraine: 45 % of Ukrainian young people wouldn’t like to live next door to homosexuals

Field stage of the research lasted from February 5 till 16. 2020 respondent from 110 cities, towns and villages participated in it. The territories of Crimea and Luhansk regions that are currently not under Ukrainian control were not included in the sample.