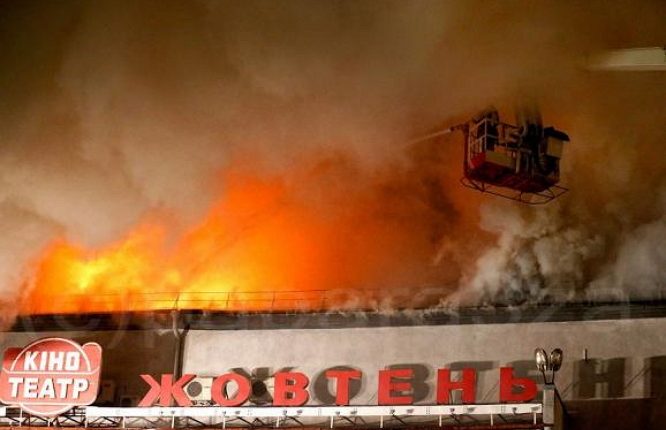 On Monday, October 5, 2015, Holosiivo district court found two students accused of Zhovten Cimena arson guilty and sentenced them to 3 and 2 years on probation.
"Both accused are found guilty of hooliganism" the spokesperson of Prosecutor's Office of Kiyv Nadiia Maksymets told to Interfax-Ukraine.

She also told that one of the accused was charged with illegal weapon possession. The punishment of imprisonment for two and three years correspondingly was imposed on the accused, including 2 years on probation.

The criminal investigation into Zhovten Cinema arson is still active.

As we already informed, the Zhovten Cimena was set on fire during the show of Litni Nochi (Summer Nights) movie from LGBT program of the Molodist film festival on October 29 last year. On November 1 the suspected offenders Roman Portianko and Oleh Rybalchenko were detained and confessed of committing the arson. Prejudicial inquiry found that the above-mentioned suspected threw smoke grenades to the premise, trying to sabotage the movie show, and that caused fire. According to the investigation the students had no intention to set the building on fire and the crime was committed out of hooligan motives.

At the hearings the accused claimed that they were driven by hatred of LGBT community. According to their statement they wanted to protest "against queer propaganda".
Young people were tried according to Article 296, Clause 2 (hooliganism) and Article 263, Clause 1 (illegal possession of weapon and ammunition) of the Criminal Code of Ukraine.

“Christian right to stone sodomites to death”. Radicals tried to ruin the presentation of gay novel