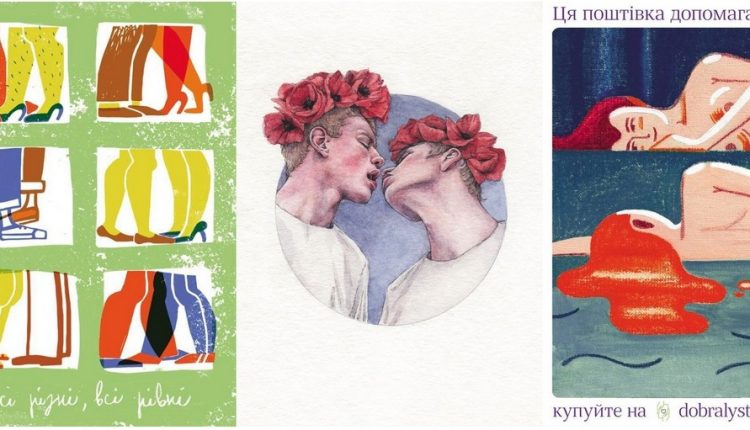 In the capital bookstore "Ye" took place a presentation of the anniversary, tenth edition of postcards under the project "Dobra lystivka" [Transl.: Kind postcard]. This charity initiative, among other things, is noteworthy by the fact that the illustrations selected to be printed were not limited to just pretty pictures, – many of them bear the social burden. And some of the works under the project directly address the ideas of equality of LGBT people.

In the repertoire of the Fund presented cards that address the topics of war and the return of soldiers from the area of ATO. Patriotic motives are being reflected in a new way and tribute to Ukrainian figures of culture and art are paid. Besides, there are several cards to support the rights of gays, lesbians, bisexuals and transgenders in the arsenal of the project. Among them – a famous work by Nicolas Tolmachev "Twins" with the image of two guys wearing a wreath of poppies, who stiffened against each other just a moment before a kiss.
As we were told by the founders of the project "Dobra lystivka" Ilia Strongovskyi and Lilia Omelianenko, the main objective of the Fund is to raise money for children with special needs by distributing postcards with images of famous artists, designers and illustrators.

"In general, during the existence of the project, we have released more than 300 postcards by more than 100 authors from 25 countries", – notes Ilia Strongovskyi and quoted by "Radio Svoboda".

The Fund was established on a wave of the Revolution of Dignity. During its existence it was gained more than 150 thousand UAH for children with special needs by selling the postcards.

Among the Ukrainian artists whose works are on the postcards – Ivan Marchuk, Oleksander Roitburd, Vladyslav Shereshevskyi, Ivan Semesiuk, Andriy Ermolenko and others.
Designer and co-founder of the Fund Ilia Strongovskyi – is an old friend and an ally of the Ukrainian LGBT community. He was one of the few public figures who spoke in support of the Equality March and participated in the campaign to its conduction.

"I believe in human rights for all people. And I perceive any discrimination as a serious obstacle on the way of Ukraine toward the civilization", – considers Ilia.