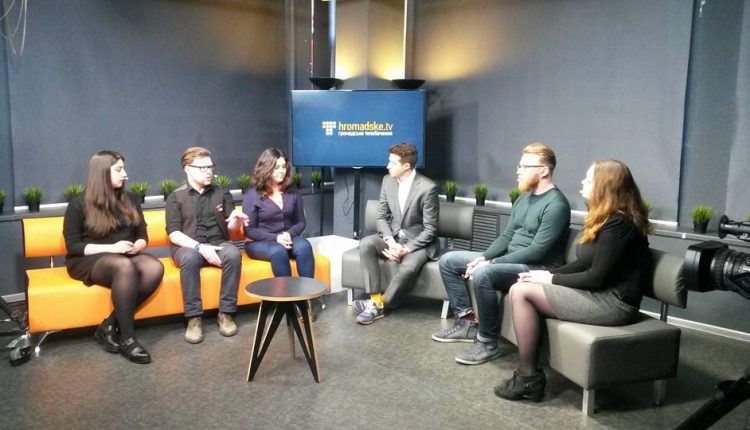 Recently some LGBT activists from Ukraine and other countries of Eastern Europe appeared on the air of Hromadske TV talking about the peculiarities of human rights movement in their countries. The participants of The Question of LGBT and European Integration of Ukraine international conference were the guests in the studio. Together with the TV host Maksym Eristavi they discussed the chance for the civil equality revolution in the Eastern Europe in the coming years.

Read also: The Question of LGBT and European Integration of Ukraine international conference will take place in Kyiv

According to Eristavi, Ukraine has one of the most ambiguous situations with LGBT movement. On the one hand, the country committed itself to supporting and developing the equality of rights but on the other hand, growing number of acts of violence towards LGBT and often inadequate position of the authorities, church and radicals in regard to human rights protection events slowed this process down.

Very proud of this interview, the first time in the region's history we managed to gather a group of Eastern European LGBT activists for a unique TV interview.In the end we all agreed that local governments are just playing theatrics with granting us our born-right equality so they can take it back right after EU stops paying attention. Thanks to brave folks from იდენტობა | Identoba, Гей-альянс Украина/Gay Alliance Ukraine, PINK Armenia, Centrul GDM, Russian LGBT Network, it was pure honor.

Besides, there is a problem of bigger part of LGBT community isolation from the human rights movement processes, as the executive director of GAU Volodymyr Naumenko says. “There is a considerable gap between the organizations, LGBT activists and bigger part of LGBT community that is not involved in the activism. But this gap started to decrease, as most organizations changed their agenda considerably and working with the community is now one of the main priorities.”

Volodymyr points out, answering the question whether Ukraine can be role model for other post-Soviet countries in the context of LGBT movement evolution: “Of course I want to believe that it is possible for Ukraine and we make all possible efforts for this. But there is a problem that no government of our countries benefits from a strong civil society so they use indirect repressions to LGBT organizations in order to show that we are seemingly democratic country but everything that the government doesn’t like should not exist.” According to Volodymyr, on the one hand the governments of Eastern European countries commit themselves to supporting civil society, democracy and democratic values, but on the other hand they play a double game showing other initiatives that they may find themselves in LGBT initiatives’ shoes.

The situation in Russia is worse as the government has frankly homophobic policy, as the activist of Russian LGBT network Svetlana Zakharova says. “On the one hand, people got cornered and they have to fight for their rights, on the other hand the policy of the government is homophobic. You can’t deny that more and more new laws are adopted keeping us from the work, more and more new laws that keep the homophobia growing. You can’t ignore it, you have to live with it.”

Though you won’t be arrested for homosexuality in Russia, people are still scared, Svetlana adds. “People pay fines, activists pay fines, organizations get closed, mass-media pay fines. And the media that maybe would like to cover the topics are afraid to write about it. If ten people paid huge sums, like 300 thousands, that’s huge for Russia, all the rest got scared.”

Homophobic speech of politicians in Georgia is mostly connected with election campaigns, as the representative of Identoba organization Anna Iluridze believes. “There was some part of performance in things that Georgia did for Europe [adoption of non-discrimination laws – author’s note], to be in this economic and social field. The idea of Europe is transported to Georgia in a very interesting way. As Zhirinovskii once told that he loved Georgia but without Georgians, so we have this loving Europe but without LGBT.  But the idea of Europe is more important than economic and social status of the region. Talking about the ban of same-sex marriages, I believe that this is just a tool of pre-election game.” (in Georgia there is a proposition of the referendum to have even potential chance of legalization of  same-sex marriages banned legally – author’s note).

Read also: Georgia: struggle for the same-sex marriages or provocation before the elections?

The situation with human right movement support is not simple in Moldova as well, as the representative of Genderdok-M information center Artyom Zavadovskii tells. “Even those European parties that came to power in Moldova in 2009 after the twitter revolution and harmed their own credibility because of corruption and oligarchic rule still went for elections with human rights mottos. Now we have a protest movement that, actually, is losing because of its leaders’ ambitions. Their agenda doesn’t even include human rights. Those protest events I visited even had some sexist and misogyny things shouted from the stage.”

Let’s recall that The Question of LGBT and European Integration of Ukraine international conference was held in Kyiv on March 15-16. Among its participants were representatives of Ukrainian human rights organizations, politicians, LGBT activists from post-Soviet countries as well as guests from Netherlands, Great Britain, Germany and other European countries.